Agaves are a genus of succulent that grows throughout North and South America, with a range of species that thrive in various climates. Some can tolerate snow and frost, while others thrive with extreme heat and low water.

One Size Doesn’t Fit All

Because the genus ranges across nearly all of North and Central America, from valleys to deserts and mountains, there’s no single description of their natural environment that would fit for all species.

Agave has been grown or at least sought out by humans for thousands of years, even making up a portion of the diet of ancient peoples native to the Americas. In addition to eating them, most of us are probably well aware of at least one drink made from agaves – Tequila, made from only the blue agave. Mezcal is another liquor distilled from agaves, and both types of distilled liquor only appeared after the colonizers did; native Americans did not have distillation before then.

Instead, agaves produced aguamiel, which could be fermented into an alcoholic drink called pulque. There is a considerable amount of fascinating research on the beverages made from agaves, as well as the benefits of the fermented drinks, which is well worth looking up if you’re so inclined!

Agaves also were used for fiber, which was made into cloth, rope, and even paper. They were, and continue to be, a significant part of the lives of those living in Mexico, Central America, and beyond.

While agaves can vary quite a bit, they all share a few traits in common. Distinguishing them can sometimes rely on flowers, which you only see at the end of their life, or on the mature forms (which aren’t always the same as juvenile forms).

Agaves all grow in a rosette pattern, with leaf size varying significantly between species. The leaves that circle the center of the plant typically end in a razor-sharp point, one that is just as sharp (or sharper) than the spines on cacti. If you’ve ever managed to be stabbed by an agave, you’ll completely understand why they’re regularly used as fence borders or to deter animals and people from entering certain areas.

Leaf shape varies over the plant’s life, often in a predictable curve – they generally get longer and larger, and once they start to grow smaller again, the plant is likely preparing to bloom.

A chief characteristic of Agaves is that they bloom only once, at the end of their lifespan. This can take years or even decades to occur, and when it does, it’s spectacular – some bloom spikes grow over 20 feet tall!

Agave flowers are deep and typically contain plentiful amounts of nectar, making them extremely attractive to a wide range of pollinators. One of their most important is actually bats! At night, the little flower anthers dehisce, or drop their pollen, which coincides neatly with when bats are shoving their faces into them to drink nectar. Some bat species are migratory, and even seem to time their migration path with when certain agave species bloom.

Agave flowers produce prodigious amounts of nectar, and are visited by an enormous range of birds, bugs, and other fauna – which helps spread seeds.

When it comes to excellent landscape Agaves, the Agave "celsii multicolor" is a popular choice. They reach a moderate, manageable size and are extremely attractive in the garden. They're also somewhat uncommon, and typically found as small seedlings in 4" pots if...
Read About My Specimens

I've been slacking a little lately in adding new species to the collection pages, as well as keeping my posting routine consistent - and there's a good reason for that! For the last couple months, a massive chunk of my free time has been spent on finally building a 14...
Read About My Specimens

Agave warrelliana is an extremely uncommon, if not quite rare, species of agave that is very challenging to find information about. I picked up mine from a friend who had his original plant from Rancho Soledad nursery - very likely from a decade or more ago, if not...
Read About My Specimens 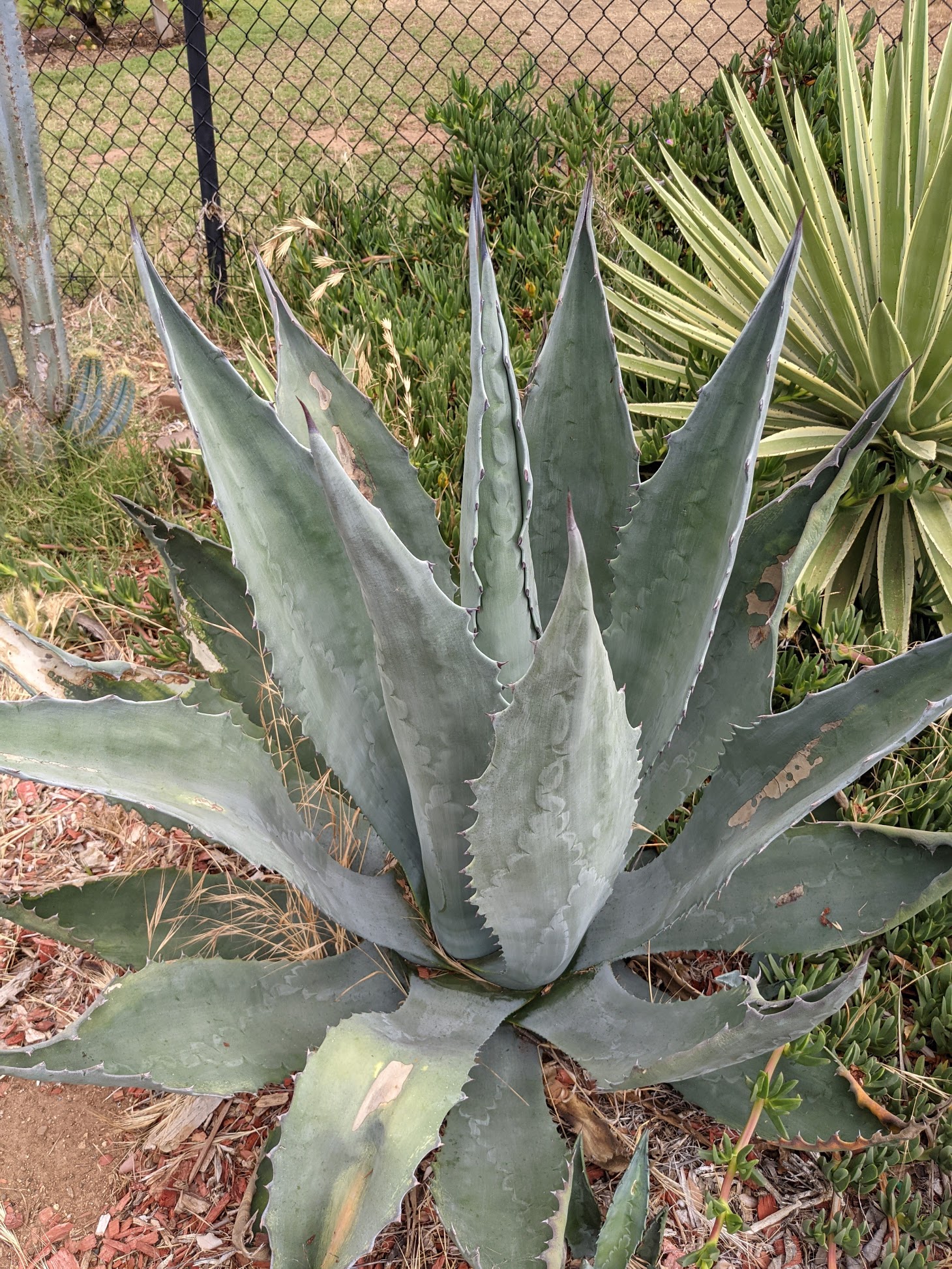 One of the most widespread and common species of Agaves in cultivation, particularly as a large landscape plant.

While there are definitely multiple subspecies and varieties out there which can be discerned by the experienced eye, I am not one of those. Originally, my specimen was a seedling grown and mixed up with a warrelliana, which they closely resemble as less than year old seedlings (frankly, many baby agaves look similar as small seedlings).

Agave americana is found primarily on the eastern side of Mexico and the southern tip of Texas, with Agave americana expansa found in an area south of Arizona down to Jalisco, Mexico.

These are enormously easy to grow with lots of sunlight and regular (but not necessarily frequent) watering. They get LARGE, however, sometimes as tall as 6 feet and 5 feet wide.

These produce plenty of suckers, or small baby agaves, through their roots, spreading like a spiny plague in your garden. They can do acceptably well as container plants, but this will stunt their growth. Depending on your goal and how large of a plant you wish to grow, this can be a good or bad thing.

Suckers are fairly easy to pull and dispose of, as long as you remove them while small and immediately after watering.

Ideally, soil should be well draining, although once established these don’t seem to care much as long as they aren’t soggy for weeks on end. Even then, americanas seem fine once they’re past being pure seedlings, perhaps in part because I’m in a region very close in weather and conditions to where they are found in the wild.

In summer, I’ll water this about once a week or so, and not at all in winter.

Tolerates winter temperatures down to the low 30s, even high 20s, for short periods, as long as the roots are dry. This particular plant lived through a hail storm earlier in 2021, although the scars are visible on the outermost leaves, appearing as brown patches.

Does best with hot, dry summers, growing rapidly when daytime highs are in the 80s and 90s or above. 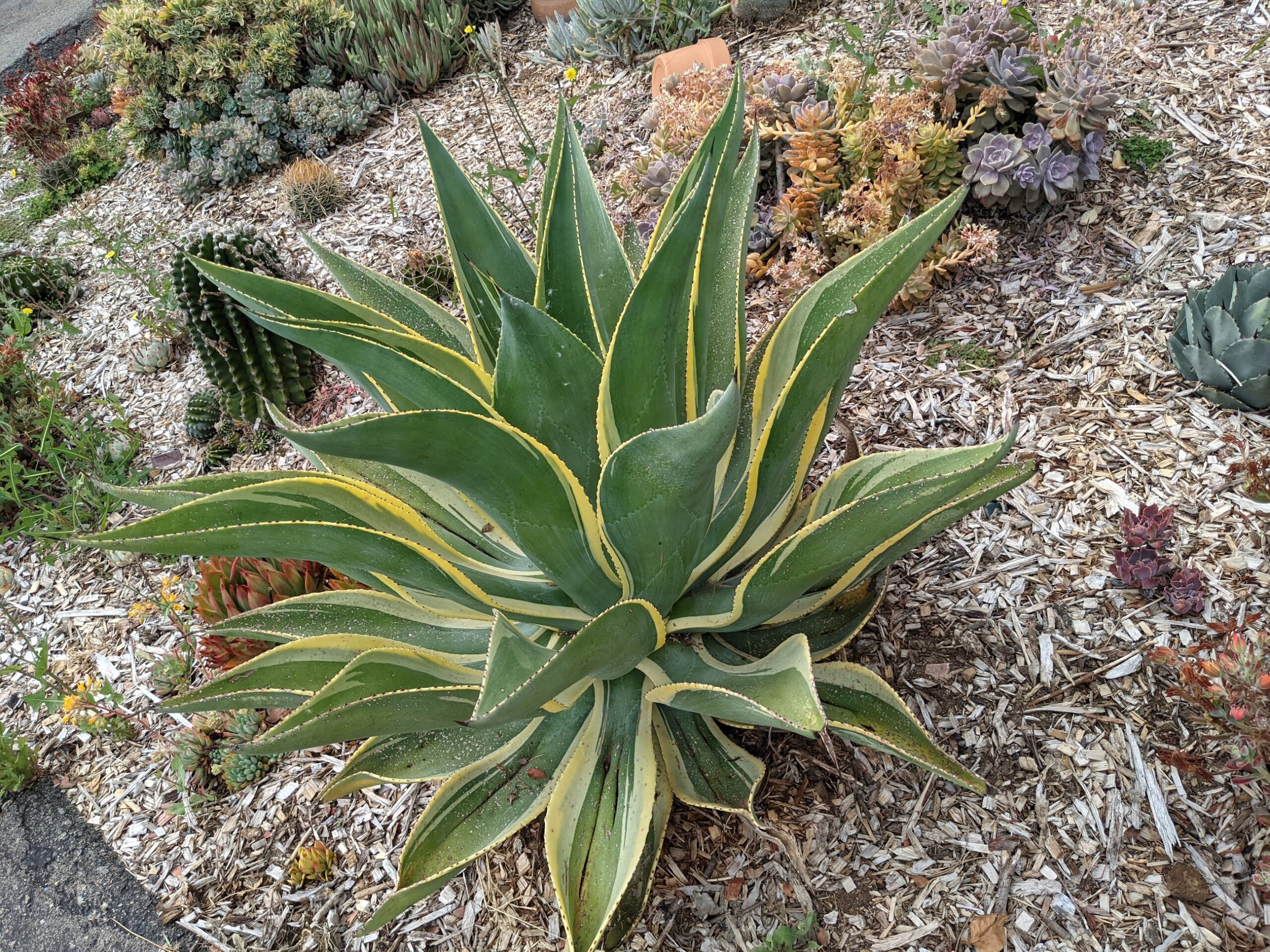 A beautiful, fast-growing species with multi-colored leaves. Has a green center to the leaves, with cream to yellow striping along the leaf margins.

Llifle refers to this plant as a cultivar of Agave mitis, and notes that it is a garden hybrid propogated by Wade Roitsch of Yucca Do Nursery, who brought it back from Thailand. The difference in growth habit of these plants as opposed to “true” celsii, which seem to enthusiastically and rapidly form a mound or field of sucker-clones, does point to it being at least a hybrid with another species.

I purhcased my plants as Agave celsii var multicolor, and will refer to them as such, but I do note that they are probably not “pure” celsii and their naming convention will likely change as more is known.

Easy to grow and very attractive at nearly all sizes. Needs nearly full sun and nice, hot summers to do well. I purchased these expecting that they would produce suckers as Agave celsii does, and I would be able to use them to landscape more parts of the yard – but alas, no suckers at all.

These also tend to have a short lifespan, typically flowering within 5 to 7 years. My multicolors are at year 4, and have reached nearly full size.

Compared to other agave species, these are moderate in size, reaching about 3 to 4 feet across and tall. Since they don’t actually seem to produce suckers, they also work well as a landscape plant, although you do need to plan for their demise.

Cold tolerant to just below freezing for short periods of time, although for their best appearance you should protect them from frost.

Thrives with hot summers are regular water; in temperatures 80 – 90+, I water mine roughly once a week. 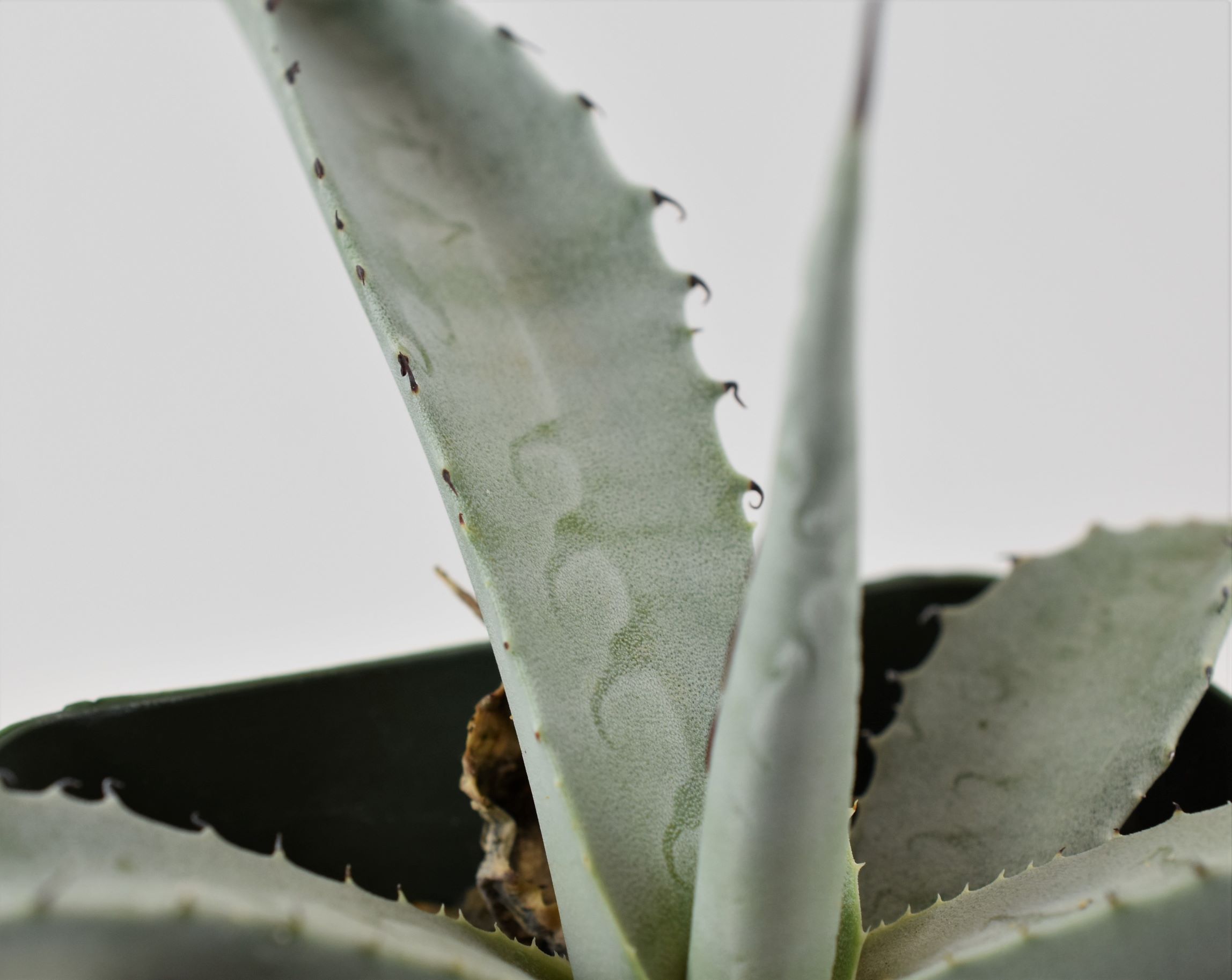 A smaller agave that can reach up to 4 feet tall and three feet wide. Native to Texas and northern Mexico, these are striking, sculptural agaves that are very cold hardy and pup like mad.

Plants have thick blue-gray leaves that individually reach up to 3 feet long, with deeply grooved shape and prolific teeth on the edges of the leaves.

Soil: Well draining soil if kept potted; 30 – 50% inorganic medium as part of the mix is recommended. In ground, as long as your soil isn’t overly clay-based or holds onto water, it’s quite a forgiving species.

Watering: Water consistently when potted, especially if under-potted, but in-ground they can go considerable amounts of time between waterings. Younger specimens need more water than larger ones.

Cold hardiness: Hardy down to 15F, making them suitable species for those in more northern areas.

Sun Exposure or Lighting: Full sun is ideal for best growth and appearance. In adequate sun, the pale gray-green flesh is distinct and pebbled, and each new leaf leaves a distinct imprint as it grows. Inadequate light results in a splayed, flattened agave, and eventually its death.

Propagation: Rarely grown from seed due to the species’ inclination to pup prolifically. Easily grown from either seed or pup, and depends entirely on the collector’s preference for appearance.