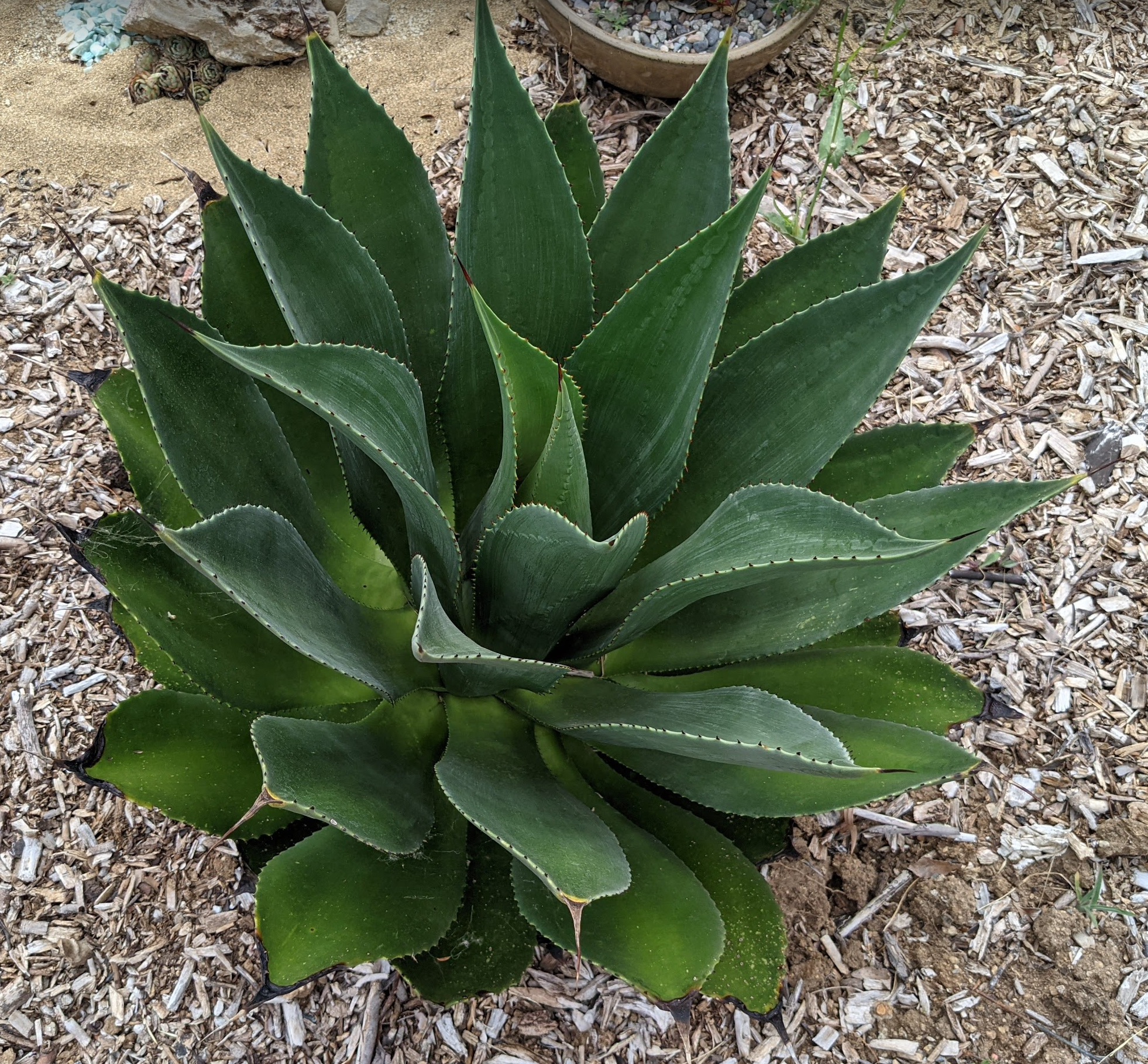 Animal lover, plant enthusiast, and addicted to the sunshine and warmth in San Diego.


Agave warrelliana is an extremely uncommon, if not quite rare, species of agave that is very challenging to find information about. I picked up mine from a friend who had his original plant from Rancho Soledad nursery – very likely from a decade or more ago, if not longer.

I will be the first to admit agaves are not a strength of mine, and I am not the biggest expert on these by any stretch. If you have more information I could add to this, please share! Everything I’ve included is my own experience, what I was told from the grower I got mine from, and my research online.

Agave warrelliana is a species hailing from Mexico, although location specifics are still spotty. A paper written by Carlos Arzaba-Villalba describing a new agave species (Agave maria-patriciae) shows an A. warrelliana being located in roughly the middle of coastal Vera Cruz, near the Puebla border. A kind Instagram friend shared with me an excerpt from his Agave book by Gentry, which documented that the species was first described in 1877 by a Mr. Baker. The most description of where these come from that I can find is that it’s assumed they are in the same general area as other known Polycephalae.

All that to say these are likely from a region in Mexico roughly near Veracruz, which is on the Atlantic side of the southern end of the country. Close to Veracruz city, weather can get quite hot, into the 90s, although inland and north it becomes more mountainous and stays cooler (rarely above 89F, if weather averages reported online are to be believed).

I picked my first little warrelliana up in 2016 (maybe 2017?) as a small seeding grown from my friend’s plant’s death bloom, either in 2014 or 2015. He let me know at the time that these strongly prefer to be in ground, but I hadn’t figured out where I could plant them, and never dropped them in the ground. For several years, it limped along, barely growing, until I decided to turn a part of our front yard into a xeric garden.

These really, really prefer being in ground, as I assume most agaves do.

When I first planted this in the ground, it was barely larger than when I’d first bought it, and a 1 gallon pot was still oversized.

I actually moved this plant after the first planting. This first spot was in more sun, and in an area that really baked hot. I picked up two more seedlings in 2019, and planted them all in the same time period.

The area I first planted these received large amounts of water with our rains that year, and combined with a weed cloth and mulch all around the base, one of the two new seedlings ended up rotting away. After seeing that the extremes of that area wouldn’t work for these plants, I dug them up and moved them to what we call the “fountain area”, which is flatter and has a (broken) water fountain in the middle. 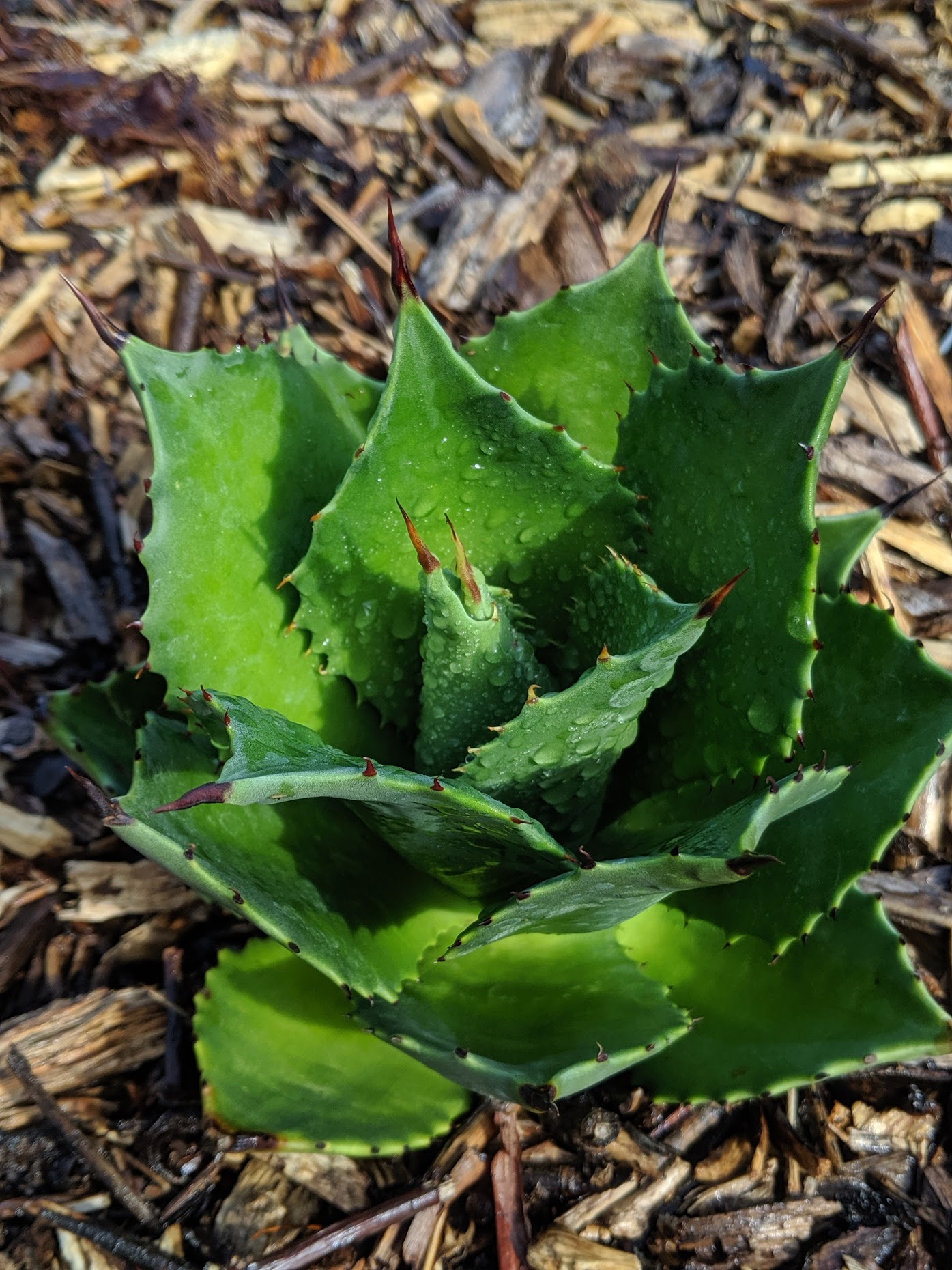 While they grew better in the prone-to-drowning side than they did in pots, they have grown even better in a flatter area. I have two plants now, one which is noticeably larger (the first I picked up) and a second that has been rapidly catching up. I suspect I’ll have to move one again as I misread the eventual size – Gentry describes these as reaching about 5 1/2 feet across, so I’ve planted them too close together. 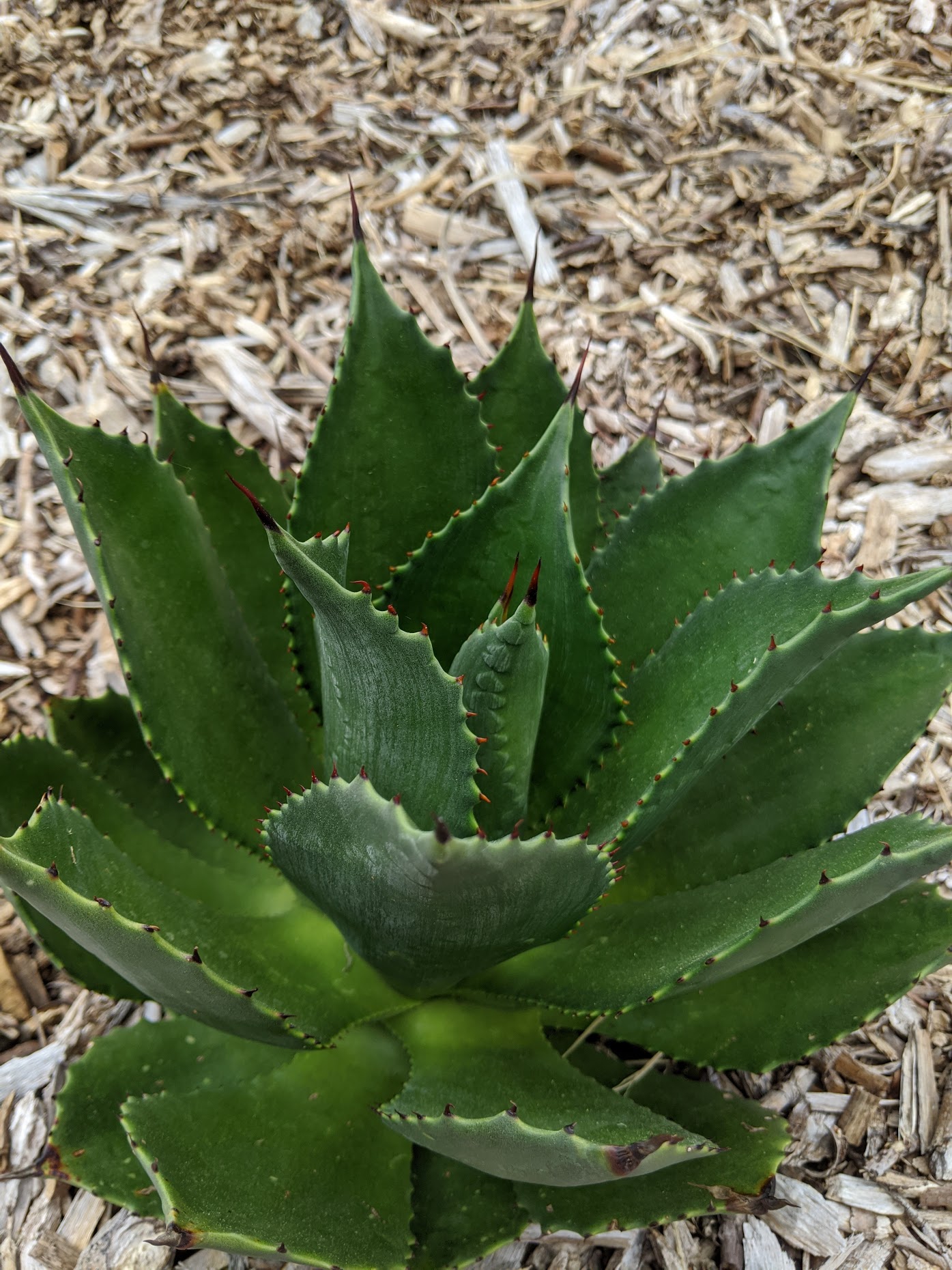 The photo left is of my older plant in April 2020; while there’s not much for scale, it’s only about 12″ across and still quite small!

At this size though, they started to develop a very pretty, rich green coloration that contrasted with the red leaf tip spines and edges.

This is the size that I moved them, and the roots were expanding but not absurd. They were very definitely starting to try, though, so if you plant your own make sure you’ve thought through the location first!  That being said…these have been pretty forgiving of all my disruptions.

Compared to other agaves, especially as babies, these are less forgiving of mistakes. Try to get them in the ground early, in a spot you intend to keep them, and then keep an eye on them. Too much water will rot them, particularly if they get sunburn from too abrupt a move from a greenhouse to outdoor conditions (which was my mistake).

Full sun, or nearly full sun, is a must for these. Mine get about 3/4 of the day with direct sunlight, and a convenient palm tree shades them during the hottest part of the day, between 2 and 4 pm.

They also love the heat! Summers of 80s and 90s on average are fantastic, and they haven’t seemed fazed in the slightest by our heat waves of 100F+. My Agave americana ended up with some folded leaves after our last big heat wave, but not these. They’re also not nearly the same size, despite being the same age – the americana is easily 5′ tall now, while these are maybe 2 or 3 feet tall (mid thigh, on me).

Mine have also done well with no protection from winter elements. If you look closely at the 2021 photos, you can see speckling and damage from our hail storm in February. There’s at least 3 new layers of leaves that have grown since then, and I’m confident you won’t even see the damage in another few months. As well as surviving hail, they also have tolerated temperatures down to the low 30s and high 20s, but not without some damage to the outer leaf edges. If you want to keep yours pristine, covering it with frost cloth will be a good idea.

Watering does not need to be excessive. Once they’ve attained some size, you don’t need to provide water particularly often, especially if you have a rainy year. Mine are getting watered roughly once or twice a week right now at the height of summer, as they share an area with other soft succulents, but they could probably stretch longer. When you do water, ensure it’s thorough by using a stick or similar to check a few inches below the top of the soil. You want to be sure they get a deep drink infrequently, rather than a sprinkle every day or two. 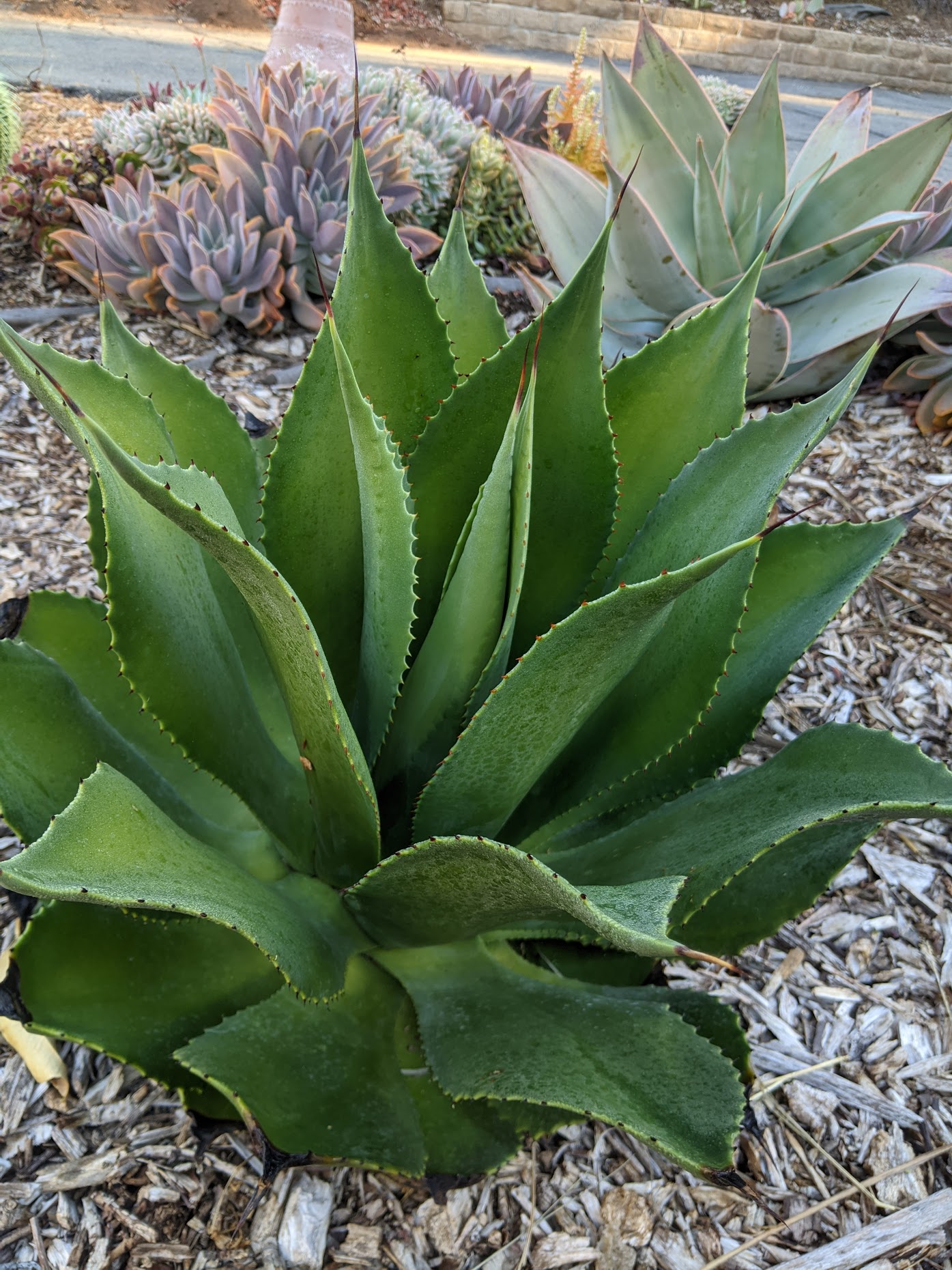 I’ve since replanted the aloes that were the original neighbors to this plant, replacing them with cacti that do well in an area that frequently gets baking hot. The aloes have moved to another side of the house where I have a larger collection of other aloes and they can produce seeds. 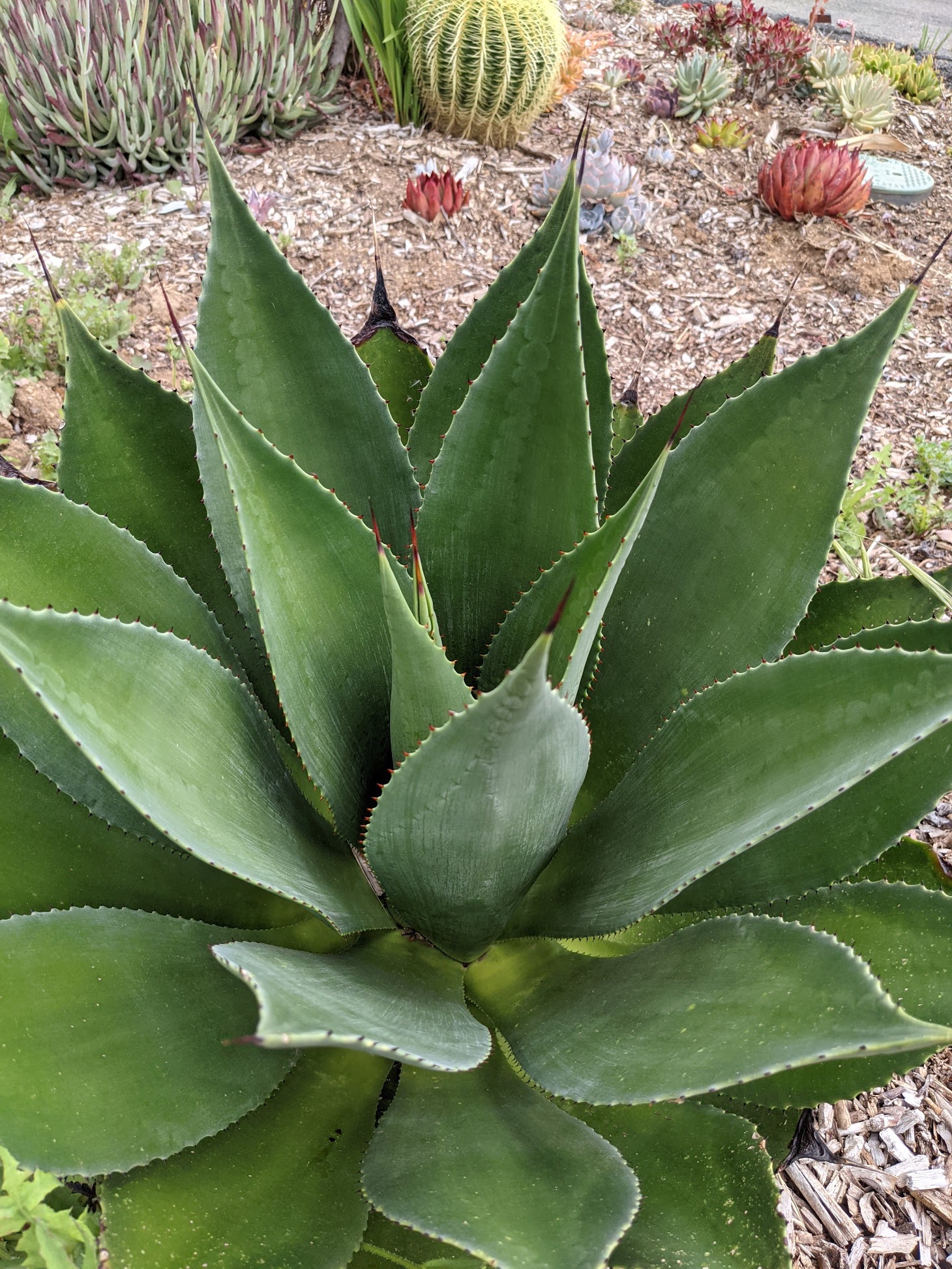 Same plant, April 2021 – you can see some of the hail damage on the outer leaves.

This is just before the weather warmed, I removed the weed cloth in this area, and then began watering regularly. You can see the leaves looking straight, rigid, and with less of the slight curve back that other images show. Is it that warm weather causes a more curved leaf shape? Is it just an age thing? Do I have too few plants to say definitively?

Since I only have two, the answer to that last question is “yes”. 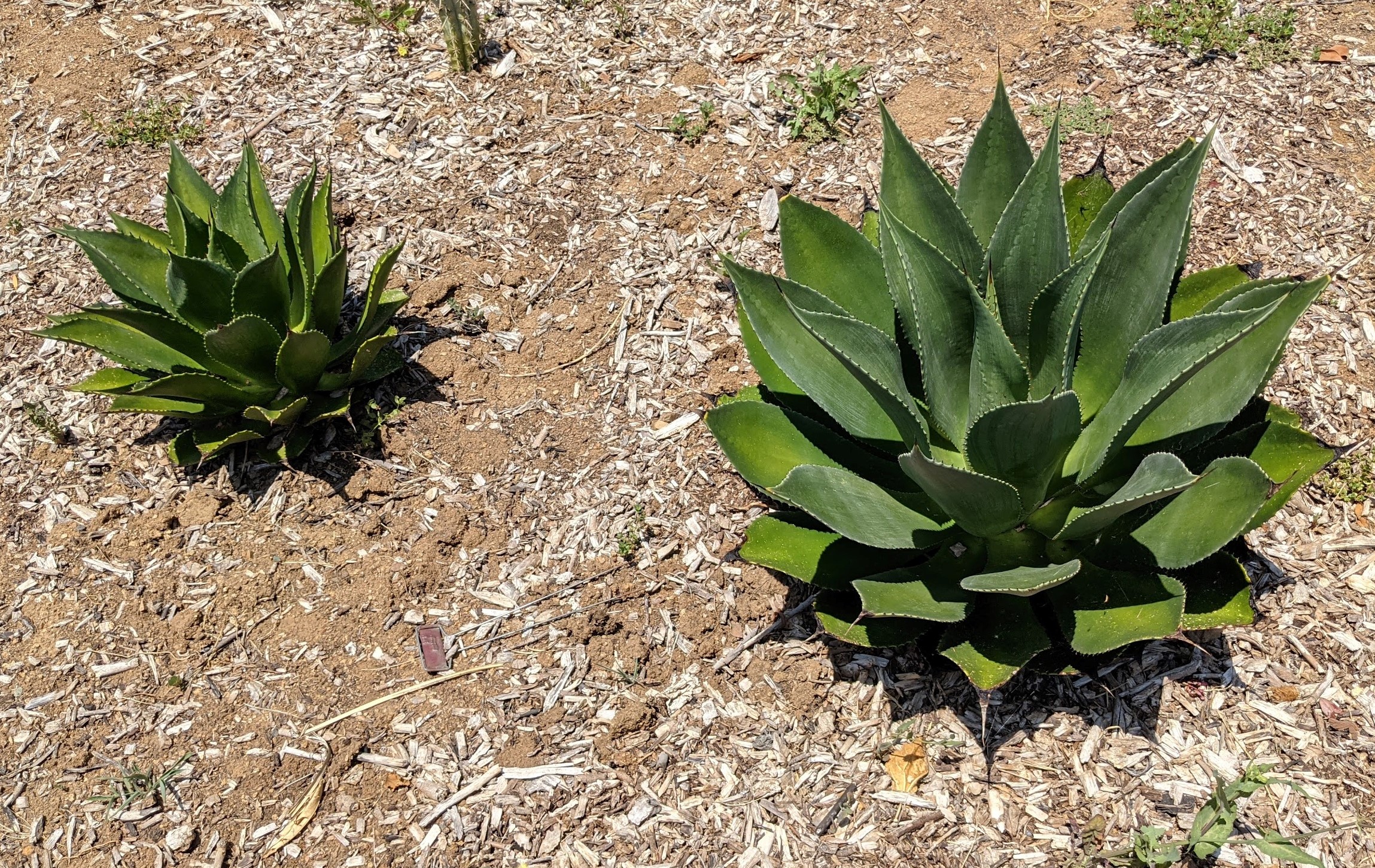 Both warrellianas as of June 2021.

As the agaves get bigger, the leaf imprints on their leaves become more noticeable and pronounced, which in turn makes them prettier and more striking.

I really enjoy the faint striping on the leaves as well, and I really hope I don’t have to move them both. I think they may look neat being a bit crowded, and I have time before it’s an issue. The biggest downside to having them so close is that when one produces a death bloom, the other is likely to as well.

The death bloom will also be a final form of identification to species – while Gentry’s book had explicit descriptions of leaf shape, it had even more detailed descriptions of the blooms. A later comment says that these strongly resemble chiapensis, but a significant difference is flower size with smaller bractlets as well as the reddish serrations on the leaf margins.

These are two of my most cherished agaves, very subtle in color and distinction but very neat nonetheless. I look forward to years of having them in my garden before they bloom, so it may be a decade or more before I can say with authority that they are “true’ Agave warrelliana.

You can see regular updates of these and my other plants at my Instagram, @TrexPlants, and if you know more about this species and would like to share, please email me at [email protected]!

← Previous: Growing Aloes, Cacti, and Euphorbia from Seeds Next : Care Diary: Gymnocalycium pflanzii and its varieties →

When it comes to excellent landscape Agaves, the Agave "celsii multicolor" is a popular choice. They reach a moderate,... 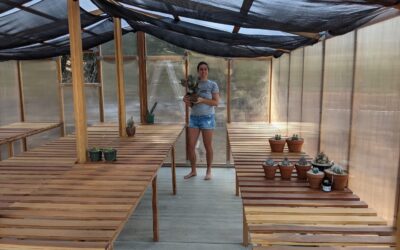 I've been slacking a little lately in adding new species to the collection pages, as well as keeping my posting...