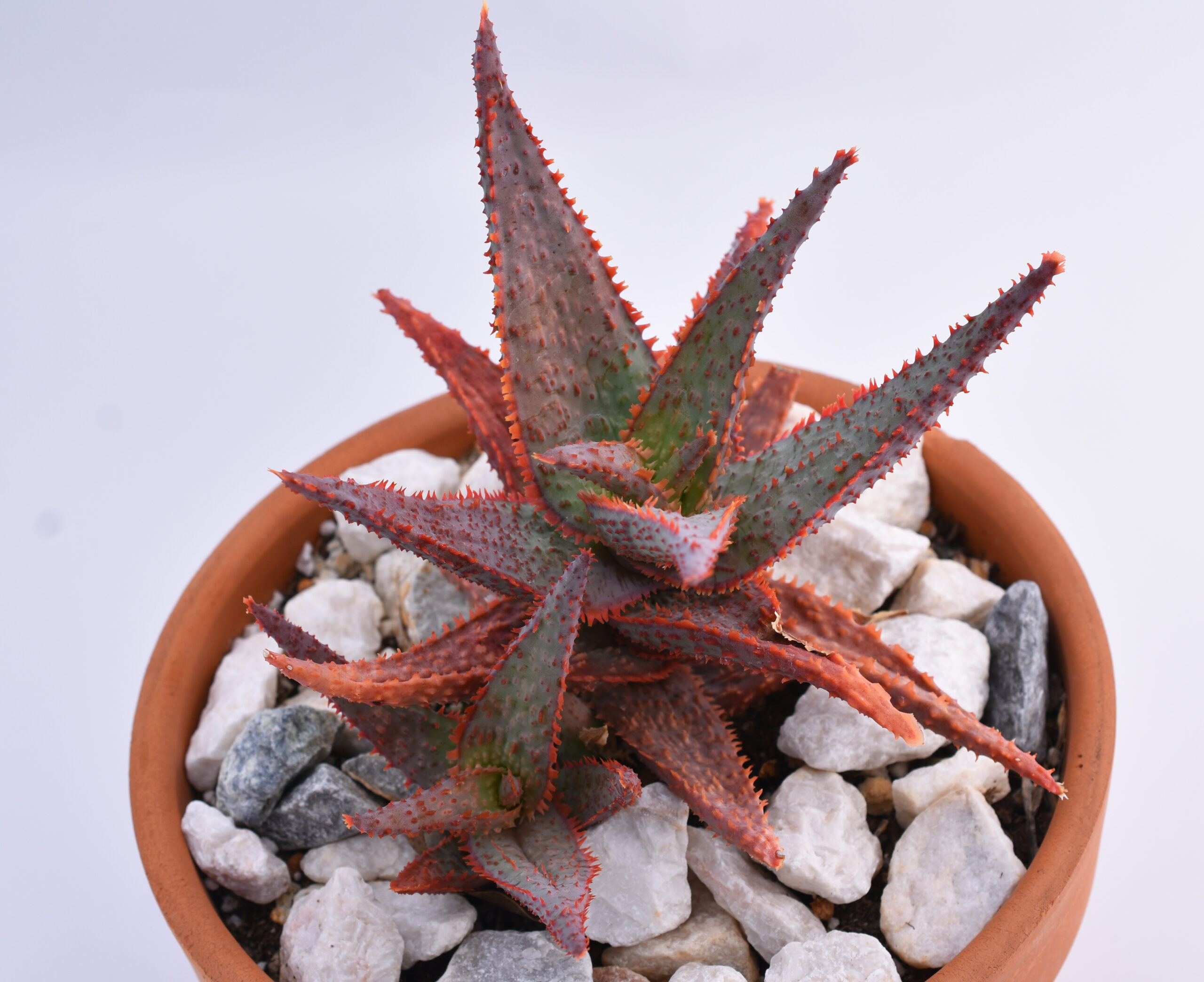 Animal lover, plant enthusiast, and addicted to the sunshine and warmth in San Diego.


This hybrid was what sealed it for me to try and start collecting more designer hybrids. At the nursery, these had a glowing look to them, and were distinctly unlike any hybrid I’d ever seen. This of course meant that I needed one!

I picked this plant up from the nursery in mid-June of this year, when we were still getting plenty of rain and had plenty of cloudy days. I thought the crazy bright colors would only get brighter with summer sun and heat, and was looking forward to that change. 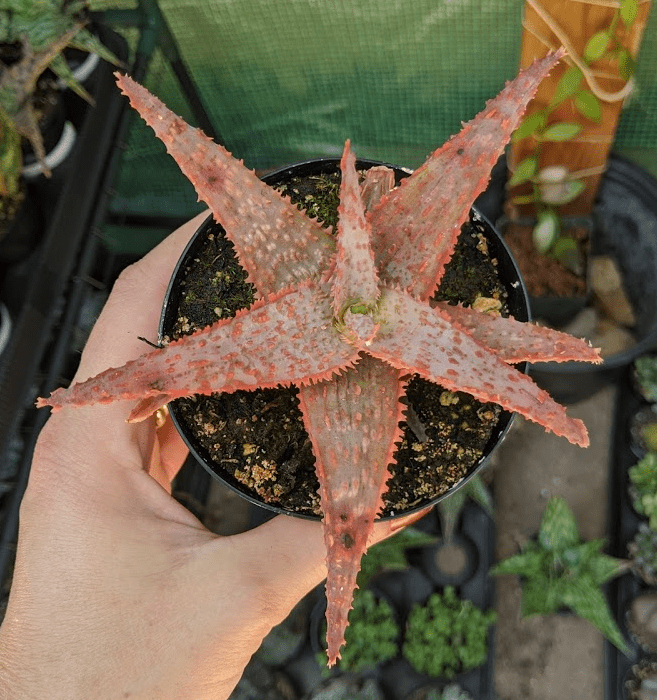 You can see a few spots of damage, but those looked just like bruising from being close to the edge of the pot rather than anything worrying. You can see that pale purple coloration along with the red texture and edging – very striking plant! I didn’t know it at the time, but part of the parentage of these supposedly includes Aloe castilloniae. This means they’re slower growing, and grow in a tall, vine-like habit.

A few weeks later, I had this plant potted up. 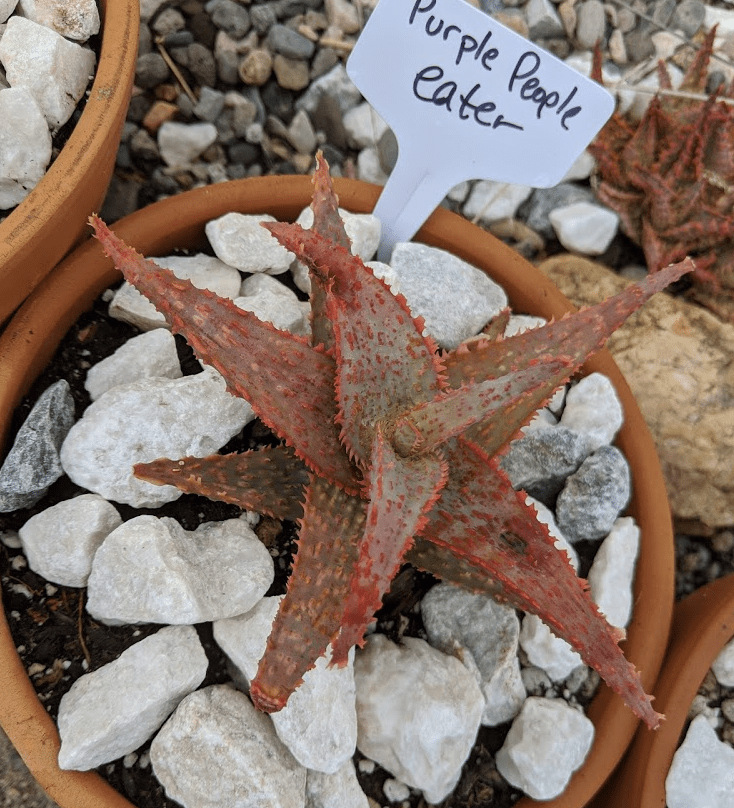 The damage on those outer leaves made the plant susceptible to sunburn, so it was only with my other hybrids for a couple weeks before I moved it somewhere more sheltered for the hottest portion of summer. Knowing what I know now about the Aloe castilloniae that’s likely in this hybrid’s heritage, as well as how hardy and resilient castilloniaes are overall, if I could do it again I’d have left the purple people eater out to cope with the hot weather all summer instead.

The result of being shaded and protected meant that it began losing the red and purple tones I saw when I originally bought it, showing more green. 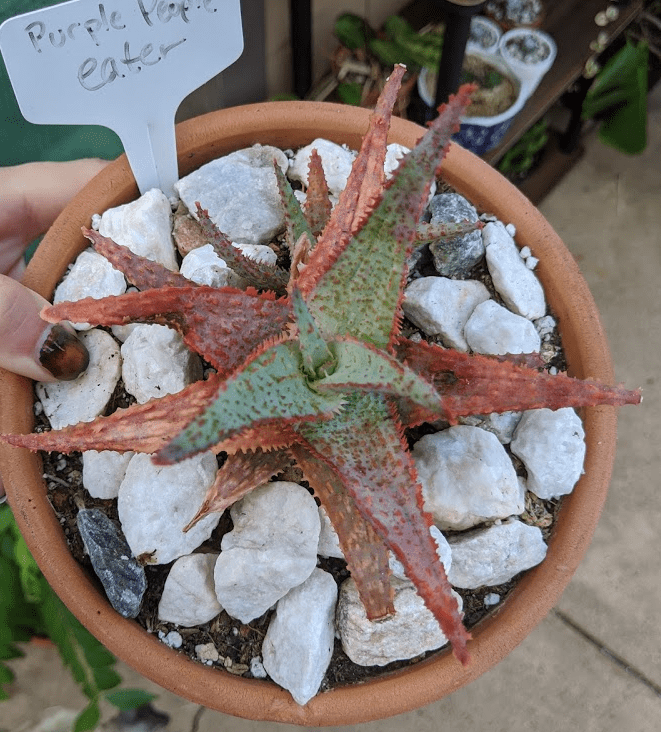 You can see some of the sunburn damage on older leaves, but the plant itself was fine – and newer leaves that you can see above came in much greener than the older ones. That photo was taken in early September, with the plant having received low water (so water restriction stress) but was shaded from about 12 pm onward. At this point, I moved it out with the other aloes, but unlike the other hybrids that were out all summer, this one didn’t brighten up in the same way. 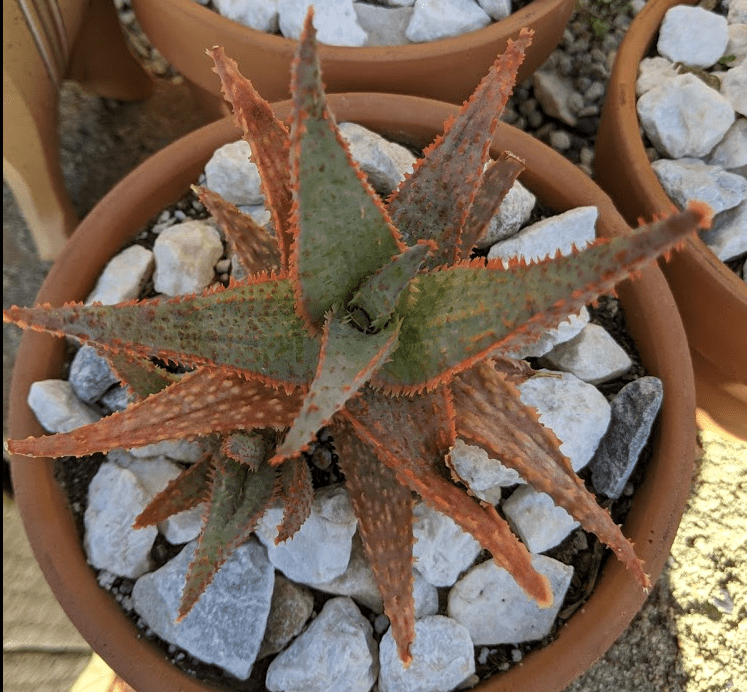 Photo above is from mid October, taken in the afternoon (if you have a color balanced monitor, you may be able to spot the change in light tone). Cooler nights and more plentiful water meant that the plant was pupping pretty readily and definitely putting out new growth. No real intensity in the coloration again, though. Around this time I snagged an Aloe castilloniae hybrid “Blue” from my wholesaler, who was releasing a limited amount of older hybrids. A friend of mine mentioned that he’d thought that hybrid was the same as Purple People Eater – if anyone knows for sure, share! Below is my Castilloniae “Blue” for comparison: 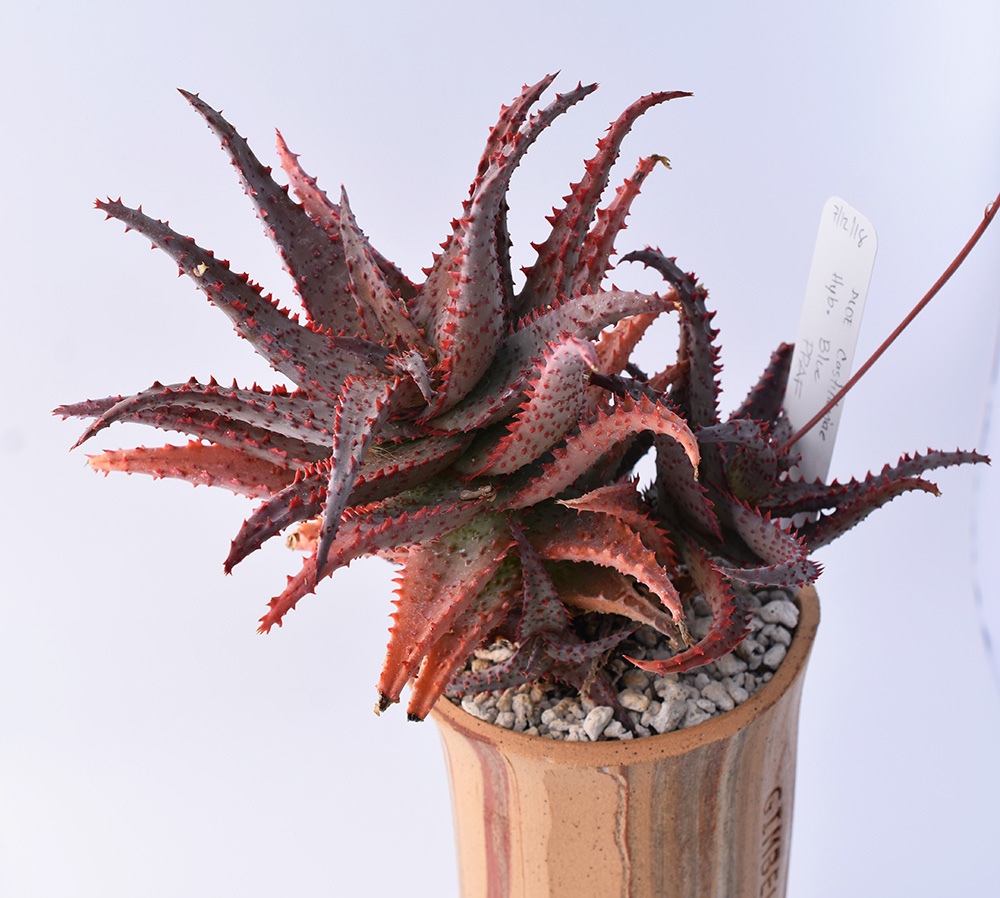 There are clearly some similarities, although the Purple People Eater seems to have red texture and edging that’s more of a fringe and less like teeth.

With the nights getting colder, down into the low 40s, the Purple People Eater has started to get some neat colors again. Here’s what it looked like at the end of October: 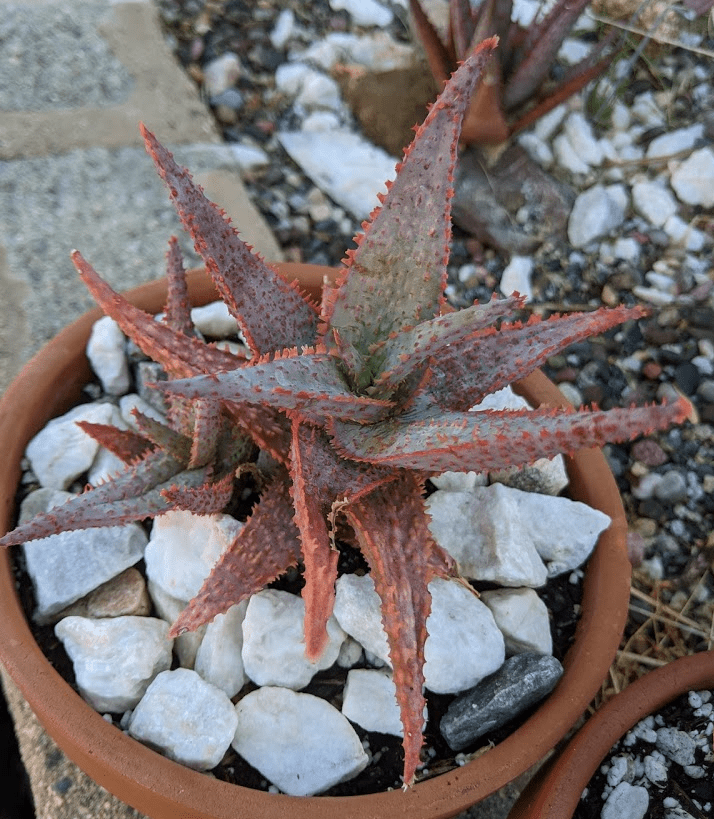 The cold nights seem to have a strong impact on the coloration of all of my aloe hybrids, and in this case, it’s made the PPE develop more of the slate gray/blue colors you can see above. Again, compared to the castilloniae “Blue”, the leaf edging isn’t nearly so defined or sharp – you can pretty clearly see a more fringe-like shape above.

Even with colder nights, I’m still watering these through winter, particularly lately as we’ve had Santa Ana winds blowing through and relative humidity in the single digits. I’m hopeful that by next summer, the plant will be able to stay in the more exposed area, and it’ll develop the neon coloration I saw when I first bought it.

Below is what it looked like in the first week of December, with the same light box set up I used for the Castilloniae. 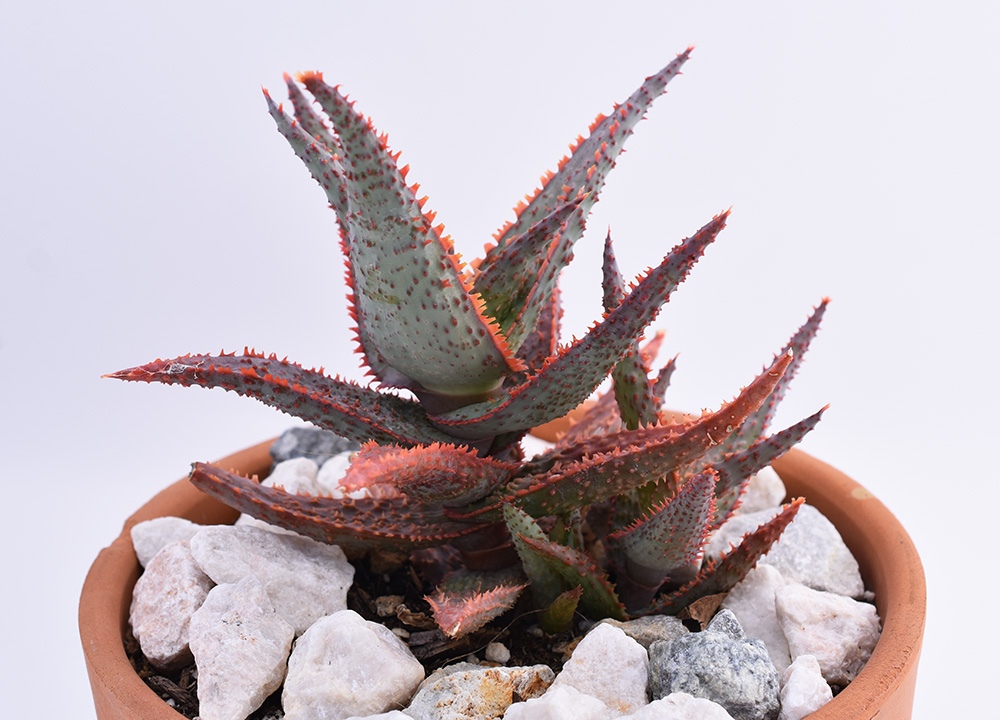 Presented this way, it bears a very very strong resemblance to the Aloe castilloniae “Blue” – so I wouldn’t be at all surprised if they did turn out to be the same. From this angle, you can also see the upright/vine-like growth habit, where it develops branches or trunks rather than sprawling in a rosette pattern.

This is a genuinely beautiful hybrid, and I’m excited to watch it grow.

If you’d like to get one, I briefly had them available in my Etsy shop, and they may become available again. This is a patented hybrid, so I can only offer them when they are released at my wholesaler. They tend to cost quite a bit more than other hybrids, even wholesale, so just be warned that pricing might be relatively high compared to more commonly available designer aloes. 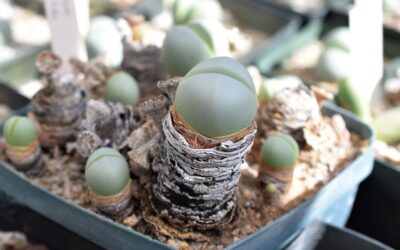 My visit to Steve Hammer's greenhouses included a number of amazing mesembs that weren't the typical lithops or... 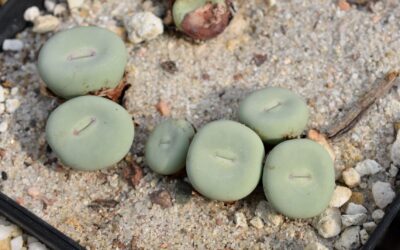 As I said earlier, I took hundreds of photos when I visited Steve's, but I've cherry picked the best to post here. ... 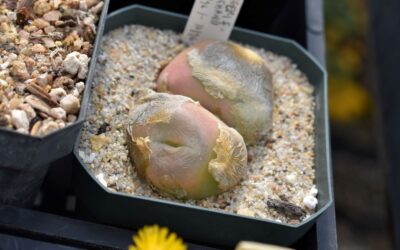 These photos are of named species that I could identify, although I won't claim any expertise in what's what.  I...